A Tale of Two Cows

To be honest, another reason the blog and webpage have been so sorely neglected is because I spend a lot of time on Facebook, and through some of the relationships I developed there, I’m now an occasional contributor to two pages – Ask the Farmers and The Food and Farm Discussion Lab. The Food and Farm Discussion Lab (FAFDL) is particularly active, and even with 8 mods, it takes up a lot of time.

But getting off that page is sort of my equivalent to getting off the farm, and sometimes what I find on other pages is enough to prompt me to address certain topics in greater detail. Here’s one such topic.

For us, being able to keep our cows fat and healthy on forage alone is purely a business decision. We’re not against feeding cows, it’s just that we’re just basically lazy, and rather they do the work themselves. The equipment and infrastructure to feed cattle is actually pretty significant, and we’re just not interested in doing that while we have other options. And as far as we’re concerned, the best (read enjoyable, and most profitable) way to keep cows is to keep them on managed pastures. 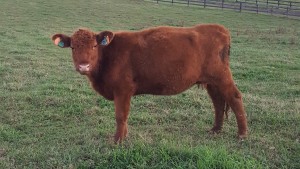 But what do you do with the cow that just can’t quite get the job done? As livestock managers, what are our obligations to the animals in our care? These two girls are a pretty good example of what I’m talking about. They’re a year apart in age, in the same pasture, and they’ve both just weaned their calves. The red cow’s calf literally weighs half of what the white cow’s calf weighs, though they’re close to the same age.

So while some of the grassfed purists (typically people who don’t actually raise cattle) will loudly proclaim “cattle don’t need grain”, in my mind this poor red girl does, and to deny her adequate feed is to willfully engage in animal cruelty.

There’s always someone out there who is more than willing to put the “cult” into agriculture. And I’m not one.

« Kicking the Dust Off
Load-Out Day »