Stacking up your veterinary work is not only cheaper, it’s easier on the owner, easier on the animals, and easier on the vet. So when I scheduled the bull for his BSE – Breeding Soundness Exam -I also scheduled some cows for pregnancy checks, opting for a later date to get it all done. Big mistake.

Having a bull fail his BSE is a bit of a setback. Having him fail the day before he is supposed to go in with the cows even more so.

Turn-in date for our bull was scheduled for November 18. He’d stay in with the cows for 70 days, then go off to spend some well-deserved (hopefully) time off. Seventy days gives each cow in the herd 3 chances to get bred, since a cow’s breeding cycle averages around 21 days. And extending the bull’s stay to 70 days lets us schedule our bull-moving Saturdays.

So I saved a few bucks on trip calls, but had used up our buffer time that could have been used to get a new bull.

Time for some serious shopping. I happened to be heading to a Black Angus bull sale that coincided with my Team Beef runners group. After a few hours of research, I had a bull picked out, a buyer’s number and a budget. 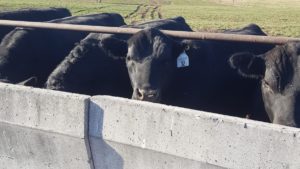 Calving-ease, a moderate frame, and a great attitude – three things we look for in a bull.

No-go on this one. Sometimes you just have to tell yourself that you’re good a picking out animals, because this guy was pretty popular at the sale, and he went home with someone else.

In the meantime, Scott had lined up a farm visit, where again, we saw some great looking bulls, with great temperaments. 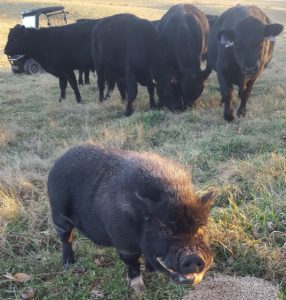 This is great group of yearling bulls, except for the one in the front. He’s just a nosy neighbor.

We were in 100% agreement on one, but he’s really too young to do what we need him to do – breed 35 cows inside of 70 days. He’s still on the list, but not for this breeding season.

With one more bull on our list, I pulled up his records on the Black Angus web page. It’s hard to assess a home-bred animal simply because there isn’t enough data to make any judgements. But there are often a few clues, and this bull had one thing that screamed out to me. This bull’s bottom line – bottom line as in the dam’s side of his pedigree – went back on that same farm to 1991. I can’t see all of the records on these cows, but I can see five generations of cows who calved on schedule, with daughters who stayed in the herd. Plus he’s two years old. As far as green lights go, it doesn’t get any greener.

Monday evening, Scott went up to see the bull. On Friday morning, we go pick him up.

And our new addition should be breeding cows by noon.

« One Last Thing
The New Bull »