As of Sunday, I was sure we were done with hay baling for the year, and was just letting myself ease into pre-holiday mode. But it’s Tuesday, and things change. One of our farming partners just baled up some wet bales for us, so we need to get them picked up and wrapped tonight. The tractor on this end of the operation has a bad alternator, so it’s on the charger right now. 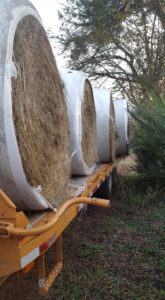 Earlier I unhooked the truck from the flatbed, so I could go get the bale wrapper, but the wrapper wasn’t in transport mode, and I couldn’t get it buttoned up to move it. On the way back to the house, I broke a serpentine belt. 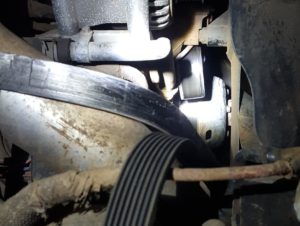 Only two hours of tool throwing and profanity to get this thing freed-up.

While the neighbor got the tractor charged (and the fuel line blown out), and the flatbed unloaded, Scott and I went on a parts run, replaced the idler pulley on the truck (the belt hadn’t actually broken), spent about two hours getting the serpentine belt unstuck from behind the tensioner housing, and another hour getting it back on.

And by 11:30 PM, we were ready to go set up the baler wrapper, and start wrapping bales. Oh, and our partner called to say that there were 75 bales, way more than the original thirty or so, and that he was only a little more than halfway done.

So the good news is that we have plenty of hay to get all our cows through winter, with some to spare. The bad news is that instead of being all cozy and domestic here, getting the house ready for Thanksgiving, I’m back in “farming” mode.

« How One of Us Got Here
Emergency Bale Wrapping – Day Two »