Many people who take an interest in livestock are familiar with the concept of rotational grazing. The practice goes by many names and variations – management intensive grazing, limit grazing, mob grazing, cell grazing – but the general idea is the same – keeping livestock contained to a smaller section of their pasture, rather than giving them access to the entire thing. It’s a rationing system, and cattle may be moved to a new section of pasture several times a day, typically seen in grazing dairies, or they may spend several weeks in a pasture before moving to a new one.

The concept is as old as animal domestication, (Ezekiel 34:14 – I will feed them in a good pasture, and upon the high mountains of Israel shall their fold be: there shall they lie in a good fold, and [in] a fat pasture shall they feed upon the mountains of Israel.) though the implementation has changed over the past few thousand years. Advances in electric fence charger technologies and fencing materials mean that rotational grazing is now a convenient and economical way to manage livestock.

This is a pretty big step from shepherds watching their flocks by night. My family had several of these weights we tied animals to so they could graze, and somewhere at my parents old house, is at least one wheel bearing, mounted to a stake that was pounded into the ground. 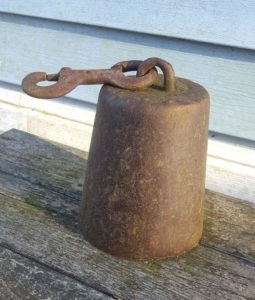 We had a bunch of these when I was a kid. This one is for a calf, and weighs about 40 lb. 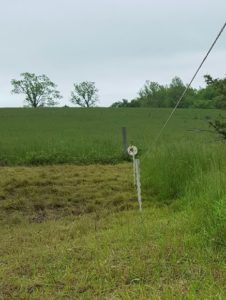 The cows actually grazed this too short, but these are the tools we use these days for rotational grazing.

« Meanwhile, Back at the Ranch…
My Top 10 Annoying Things I Hear about Grassfed Beef. And One Really Good Thing. »