“If It Ain’t Profitable, It Ain’t Sustainable” or “Don’t Dump Your Mistakes on Your Customers”

People often ask me if we use heritage breeds.  I can’t say as I really know exactly what a heritage breed, is, but it doesn’t matter.  The answer is “No”, and the answer has nothing to do with whether or not a breed has genetic value somewhere.  What matters is if that breeding decision makes sense for our customers – all of them – not just our retail meat customers.
We use mostly use Red Angus cattle, the red version of the well-known Black Angus.  Given the popularity of Black Angus,  it’s not surprising that the reds aren’t as widely recognized outside of the cattle industry, but there are a lot of them.  Like the blacks, they’re known for their docility, feed efficiency and meat quality.  But their red color give them an edge over the blacks in the hotter regions of the country.  Though they have separate breed associations here in the United States, they’re considered the same breed in Canada and England. 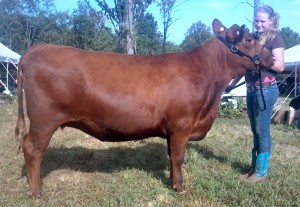 Even the most die-hard Black Angus person will admit that this is a nice cow.

The other breed we use is the Murray Grey, an Australian breed.  Some people call them a heritage breed, but they’re quite popular in Australia (depending on the source, they’re either the second or third most common beef breed there), so I’m not sure where the “heritage” idea came from. 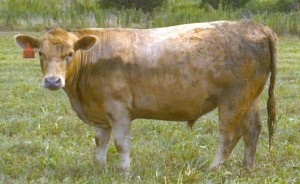 Murray Greys – Because everyone is a sucker for a Shorthorn.

Murray Greys are a Shorthorn-Angus composite breed.  A composite is different than a cross.  It’s a cross that has been developed and managed for certain characteristics for several generations, and has it’s own breed association.
By using these Angus-type cows, we get the best of both worlds when it comes to selling our calves.  The “best of the best” are retained either as heifers to go back into the breeding herd, or as steers to go into our grass finishing program.  Calves that don’t look like they’ll fatten quickly on grass, and those who have been treated with antibiotics, are sold as commercial cattle, and go into conventional beef programs.  Since our cattle easily adapt to a conventional beef program, we typically sell them straight off of the farm.
Last year I saw some Black Angus x Highland cattle sold at the local sale barn.  They were small, shaggy and had scurs, which look like horns – the top three things order buyers will avoid.  They were selling for over a dollar per pound less than the Angus type cattle of similar weight.  That’s an enormous difference in price on a 500 pound animal!  Everyone lost out on that deal, most of all, the cattle.  You can be certain that they didn’t end up on one of the “cushier” feedlots.
In my mind, one of the responsibilities of a cattle producer has a clearly defined vision who the buyer is for every animal he or she produces .  By having a large pool of willing buyers for all our cattle – not just the resounding successes – we can be sure that all our cattle become somebody’s bragging rights!

« Sprite – The “Nimble, Elf-like Creature” – Not the Soda
Meanwhile, Back at the Ranch… »