About 15 years ago, my mom moved into the rental house on the farm, bringing with her at least two generations of accumulated domestic projects, most of them not completed. She’s now in a nursing home, and I’m left emptying her house, sorting through darning eggs, my grandmother’s afghans, and boxes of zippers to be recycled (yeah, that’s a thing, or at least it was).

When I was little, I never remember my mom sitting down without some sort of knitting, mending or embroidery work in her lap. Going through the boxes and boxes, I found handiwork that had been untouched for decades. I was able to trace my mom’s domestic artistry from the more utilitarian to the more decorative, and started to develop a clearer idea of what my two older brothers’ early years were like.

A favorite form of cultural one-upmanship in some families, particularly those bearing any traces of Appalachia, is “we were so poor”. I’m always amused by this, because, as far as I’m concerned, none of it applied to me. For my brothers though, eight and twelve years older than I am, the game is a little more realistic. They remember when things were a little rougher. 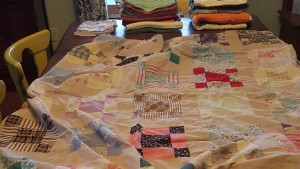 One box in my mom’s house contained a couple of quilt tops, which I readily dated to “pre-me”, since I didn’t recognize any of the fabric, though I could tell a lot of it was from old feed bags. The batting was gone, but I found the backing, two old tablecloths. And it would be fair to say that they’re not too attractive. You could call them ugly, and you’d get no argument from me, though I’m going with humble. They had been my brothers’ when they were little, and were mid-renovation when they were boxed up, undisturbed for over sixty years.

Whether I like it or not, I’ve inherited dozens of unfinished projects, and I can’t bring myself to just throw any of these things away. Some I’ll complete, some I’ll hand off. The quilt tops will go to my niece in Alabama, who’ll finish them.

And it all makes me wonder what other souvenirs I’ll find from a time long before we got all uppity with the central heat, running water and flush toilets.