Images of grass growing just aren’t very interesting, no matter how artsy I try to get with it. But bear with me, and you’ll be able to see a few things going on in this photo. The girls haven’t gotten to these plants yet, and with all their leaves, they’re much easier to identify. 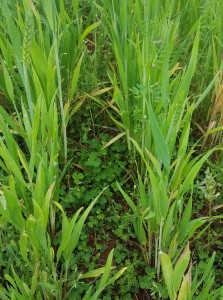 On the upper left is mature triticale, which is good, since that’s what we planted in this field. Triticale (it’s supposed to be pronounced trit-ih-KAY-lee, but I’ve mostly heard it pronounced trit-ih-kale) is a sterile hybrid, a lab grown plant, with an interesting history – it’s a cross of wheat and rye, that wouldn’t likely happen in nature. It’s only with careful breeding and the use of colchicine, a potentially toxic plant extract, to render the seeds fertile, that we have this versatile and hardy forage. The thing with triticale, and most grasses we use for forage, the cows will avoid it once it’s developed a seed head. The plant’s energy has been transferred to the seeds, which are now protected within the hull, and the leaves are now merely support structures, with decreased nutritional value. The idea it to graze the field before the plants generate seedheads, but with the weather conditions we’ve had this spring, cool and dry, then cool and wet, we’ve let some of the grazing get ahead of us.

At the top right, you can see crown vetch, a potentially invasive plant, but don’t tell the cows that. They’re pretty fond of it. They just happen to have missed this particular plant, probably because it’s so close to a mature triticale plant

And trying to make its way up from the ground surface, there’s white clover, another introduced species. Right now it’s being protected by the triticale, but as the cows continue to graze, and the weather warms up, the white clover will start to assert itself in this grass stand.
Here in the mid-Atlantic region, there are few native grass species in any large numbers – most of the grasses you see, in pastures, along roads, or in your yard, originate around the Mediterranean, imported by design or by accident, over the past 500 years or so. Re-establishing native grasses takes considerable time, effort and outlay, against considerable odds – they have a really hard time competing against the newer, introduced species. And with the right management, these introduced species can allow land to support wildlife, provide forage for livestock, and help keep our soils and waterways healthy.