Our farm has been farmed continuously (except during the war) since the 1730s, when William Pannill built Green Level. Our farm was divided off of the original Pannill property years ago (Green Level is still a residence), and other than an old roadbed, there are few remnants of the 18th century activities.

We sold off some timber several years ago, and uncovered some more modern farm equipment in the process. One of these I had long assumed was an old sickle-bar mower, and I had walked by it hundreds of times. During the summer, only the levers were visible over the blackberry bushes, but as I walked by it the other day, I realized there was way more to it than just a mower.

There’s a cutter bar, and the remnants of a conveyor. 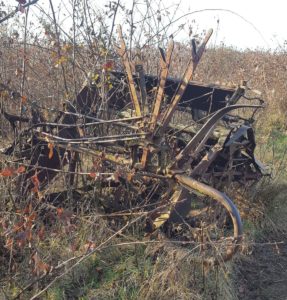 Here’s the intake side. 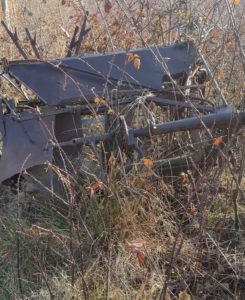 Here’s the output side.

I had found some sort of grain binder, and the McCormick-Deering stamp on it easily led me to this YouTube video, showing one in action.