C93 looks good now, and is in the pasture with the rest of the cows. But a month ago, it seemed she was as good as gone.

On October 4, when I did my afternoon cow check, I found C93 in trouble. When cows are calving, they tend to get up and down to facilitate the birth. C93 couldn’t get up. She had experienced what we call calving paralysis – damage to the obturator nerve as the calf passes through the birth canal. The calf had died, and C93’s labor had basically stopped. Only the front feet of the calf had emerged, and even with OB chains – which go around the calves feet, I couldn’t pull the calf out. I needed help, and I needed it quickly.

Fortunately our neighbor was available, and after getting the calf pulled, he administered calcium, as a precaution against hypocalcemia – milk fever, and Dexamethasone, or Dex, an anti-inflammatory. But C93 still couldn’t get up, and without water, feed and protection from predators, she’d die an agonizing death. We had to get her to the house.

There aren’t too many ways to get a full grown cow that can’t walk moved. And C93 is a beef cow, so she’s not used to being around people that much, but she never panicked, even being moved. 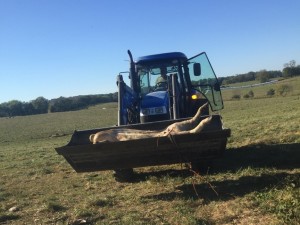 At that point C93 was what we call a downer, or non-ambulatory cow, and although she could easily be fed and watered, and protected from heat and predators, there are still a lot of potential risks as the damaged nerve recovers. Though the prognosis for this condition is pretty good, a cow’s recover is dependent on recumbancy management, ensuring she’s not left in the same position for extended periods of time. The pressure of her body weight could inflict muscle or nerve damage, or inhibit blood flow. Not only did I have to ensure that she stayed in a sternal position, not laid out flat, I had to be able to roll her every few hours if she hadn’t rolled herself. And if she laid out flat, I had to get her up on her chest almost immediately, to prevent the contents of the stomach from entering her lungs. And she outweighed me by about 900 lb. If she was going to ever get up again, she needed to cooperate with me, because I was the only one around during the day. 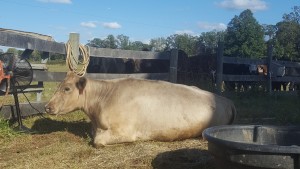 And she did cooperate. Scott figured out a way where I could tie off her hind leg with a tow strap, pull it under her shoulders, and with her help, I could roll her over. And she ate. And she drank. And her friends visited. She had a fan, and shade, a blanket for chilly evenings, fly spray, and a vet on-call.

Cows with calving paralysis typically recover within a day or two. C93 didn’t get that memo. I’m not sure how many times I’d check her in the middle of the night, find her laid out flat and exhausted, and have to wake up our youngest son to help me roll her up on her chest. After 10 days, I had pretty much resigned myself to the fact that the damage was more extensive than we had initially thought, and she was never going to get up. But on day 15, I saw this out of my office window.

C93 spent the next two weeks in the yard, working the kinks out of her legs, staying clear of her herd-mates who might want to rough-house, and keeping out of the mud, where she might risk re-injury. Thirty days later, she’s back with the group. I’m not sure what we’ll do with her in the long run, but for now, she’s enjoying the green grass and sunshine.