Maybe Not Lovin’ It, But at Least We Ain’t Starving 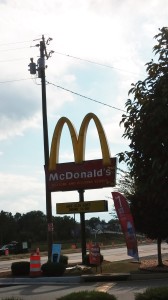 We raise grassfed beef. “Grassfed” as in meeting the USDA standard for “Grassfed” as in no grain ever. We’ve spend years focusing on feed-efficient cows, the bovine equivalent of the girl who gets fat just looking at a Twinkie. We’re always working to improve our forages and provide our cattle with not just lots of grass, but lots of quality grass, year round. And we sell a lot of beef.

I’m not a beef snob by any means, but I do confess to having become a bit of a beef connoisseur over the years, appreciating the subtleties of beef – the appearance, the texture, the flavor. I’m aware of the potential negative impact cattle can have, particularly on our waterways. And I’m fortunate enough to be able to tie these two things together, traveling all over Virginia discussing the environmental and economic benefits of pasture management.

I’m on the road at least a couple days out of the month, attending cattle related events throughout the Commonwealth. Most of these sessions start in the morning with doughnuts and coffee, and end in the afternoon, somewhere after a lunch of barbeque, leaving me with the prospect of a quick dinner on the road home. So where does a purveyor of sustainable beef go to eat when traveling and it’s late and time is short?

Yeah. I head straight for the Golden Arches.

As you roll your eyes and make faux vomit sounds, consider this. Consumer activism of the eighties looks pretty quaint by today’s standards, but McDonald’s has a long history of assessing the validity of consumer complaints and responding to them. In the late eighties, McDonald’s was accused of purchasing “rainforest” beef from South America, incurring the wrath of American cattle producers and environmentalists alike. Whether or not McDonald’s knowingly or willingly purchased beef that was raised on recently deforested land isn’t really clear, and it’s not really the point. They got drug into a messy lawsuit and as one of the outcomes of the suit, they ended up working with environmental and cattleman’s groups to invoke policies limiting the use of deforested lands in beef production.

It was a rather painful and embarrassing lesson for them, but McDonald’s quickly recognized the value and impact of public perception, as well as their lack of control over their supply chain. If people got that worked up over what was essentially an animal feed issue, what would happen if consumers started focusing on the animals themselves?

Rather than waiting for yet another series of law suits and counter suits, McDonald’s initiated a voluntary system of audits – third-party verification – for their beef suppliers (and eventually all meat suppliers). By combining changes in physical plant design with employee training, McDonald’s suppliers realized an increase in throughput, decreased animal anxiety, decreased injuries among employees, and increased food safety. And most of us now recognize the name of Dr. Temple Grandin, who is credited with developing these strategies.

Since then, McDonald’s has collaborated with environmental groups, governments, trade associations and labor representatives, addressing issues such as waste management, water use, crop production and employee relations.

And in 2016 they intend to start sourcing Sustainable Beef, whatever that is. (Even McDonald’s doesn’t know what it is, so we’re all in good company.)

So if you’re in Virginia and you’re looking for a great steak or other cut of beef to highlight an evening meal, call me. I can hook you up.

And if you’re really tired or you’re on the road, or it’s 6:00 and everyone is starving, go ahead and whip on into McDonald’s. Without the added burden of guilt, those calories just count as regular calories.

« Bulk Purchases
Welcome to our Home »